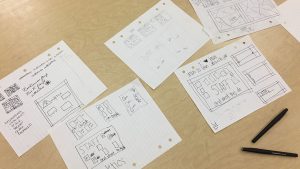 I spent an hour today talking to five students at a middle school about graphic design. We were preparing to embark on designing their year book. I went into the conversation sharing a few books about design that I love, such as Ellen Lupton’s Graphic Design: The new Basics and some AIGA annuals. I decided not to do a slide show, but rather to draw out my talking points on sheets of paper in from of them as I shared ideas. I talked about hierarchy, contrast in scale, texture, type, line, etc. I would ask them to comment on my pencil sketches as to which elements on the page they found more appealing and why. I asked them to list all the ways in which hierarchy could be achieved, and they promptly listed over a dozen ways. I was amazed! My college level students in basic design classes often cannot do articulate the same ideas. I continued to talk through my thumbnail sketches of grids, margins, gutters, and general strategies of theme and variation for compositions in a sequential narrative. Again they seemed to get it and point out strategies for making a compelling story. We discussed the section of a year book and I ask them to develop a few spreads in ten minutes that express some concept they thought might be compelling. The sections included athletics, arts, staff, and others. Again they worked quickly and we had time to do a quick critique in the last ten minutes. Once again they were articulate and I think they realized the having a “drawing” in front of them to talk through made all the difference. While many were busy multitasking on their phones, I managed to get them to focus and share their ideas and give each other constructive critique. Wow!

What did I learn? That you can teach a ton about graphic design in one hour to middle school kids. I am not sure they fully absorbed it all, but if my own twelve-year-old daughter is any gauge of this age, they are all sponges able to absorb far more then we give them credit for at times, even if they are bouncing back and forth on their digital devices.

What do I think they learned? We will see next class. I asked them to come back with a type face example that they really love that we might use in the year book. I brought a book all about type design that had tons of examples. One of the students asked towards the end if she could take a look at it. It was one of those moments when you watch a student looking at a book and wonder if this is a turning point for them, a type designer in the making. I am sure she had no idea that there are people out there that make a living out of just designing type faces.

What can you do? Share your practice with a middle school kids. Chances are they have not been exposed to your specific discipline in your unique view, and even if they have, you will just be amazed by their ability to take it all in.